I ran into one of the coolest things ever to improve VR immersion when playing VR flight games requiring a lot of buttons or worse, keyboard key presses. It starts with VoiceAttack, a Windows program that leverages the PC’s voice recognition capabilities to map phrases you speak to actions to execute. Those actions can be a simple keypress to a complex macro with mouse and recorded audio dialog. The default profile allows a few example things like saying “calculator” to launch the calc.exe, and “close calculator” to close it, by terminating the process by name. I loaded another profile that allows me to play any chess game with my voice. But where it gets really interesting is when you combine VoiceAttack (which sells for around £10) with other professionally developed profiles from companies like HCS. HCS uses professional voice actors and even some celebrities, to record thousands of responses for the thousands of commands you can issue with your voice. It truly makes flying in VR a joy. There is nothing so cool as just saying things like “Missiles away on my mark”, “Missiles ready”, “Fire!”, “Missiles away” (or something like that). There are a number of HCS voice packs for a number of games with prices around £10. All in all, very economical way to massively increase the immersion and enjoyment of any VR game that has a lot of button presses or keyboard presses. VoiceAttack is required for HCS to work, but you can use VoiceAttack on its own if you are willing to create your own profiles. 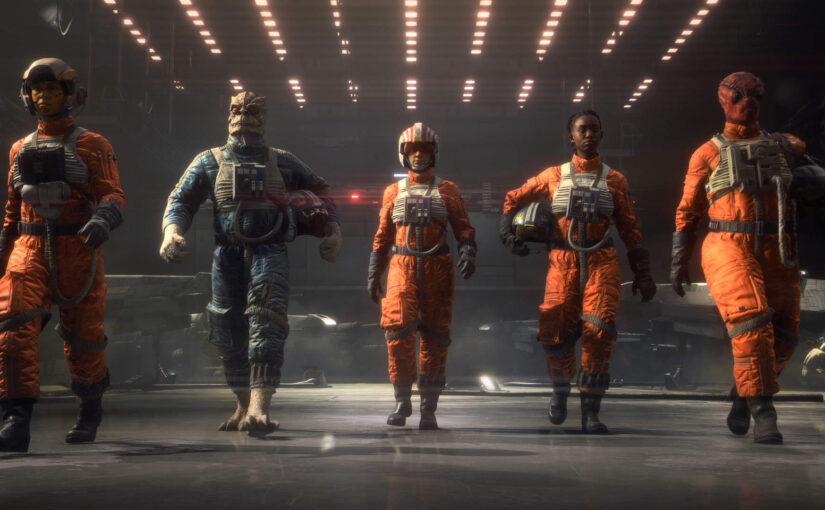 I’m not going to review the game. There are plenty of reviews out there already. It’s great! The really cool thing is I’m playing it with my Quest 2 headset on which makes it even cooler. When you are in a dog fight, it makes it much easier to keep track of where other ships are as you can just follow them with your eyes until the ship is able to bank around to have them in your sights again. Very cool. It also cool the way they handle the hangars as well, allow you to leap/teleport to different pre-set points and then look at everything in 360 from that angle.

I’m using Virtual Desktop to make the magic happen. First I purchased Squadrons on Steam (on sale at the moment!). I played it on my PC to make sure I had our Thrustmaster flight stick setup. I also made sure I was signed into my EA account as not doing that causes an annoying prompt in VR which is hard to get around (for me anyway). Then I put on my Quest 2 and launched Virtual Desktop. If you have not set up Virtual Desktop for playing VR games on Stream, there are other videos that will explain how to do that. (Basically, you buy it from the Oculus store, then use load and use SideQuest to install a sideloaded Virtual Desktop app that allows for the playing of Stream Desktop Games on Quest and Quest 2.) So, after launching Virtual Desktop, I select the “Games” menu and click on Squadrons. Boom! That’s it. Enjoy!

I’m eager to get my hands on the new Quest 2 VR headset. It boasts some impressive sounding new specs, but at the same time, may have made some concerning shortcuts to get the price down to the $299 and $399 price points. I should be picking mine up at my local BestBuy in the morning. Hopefully it’s there!